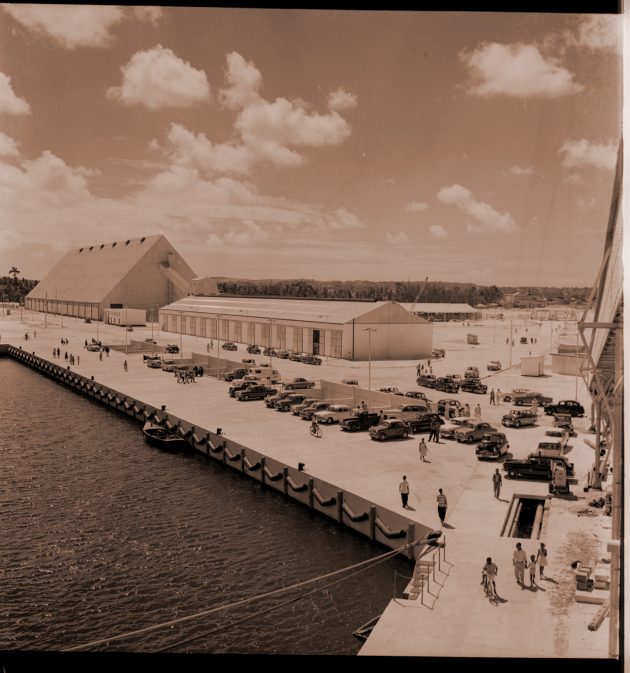 When the Deep Water Harbour was opened on Saturday, May 6, 1961 by Sir Grantley Adams, Prime Minister of the West Indies, Pelican Island was firmly cemented into the new water gateway to Barbados.

Located just 600 yards away from the mainland, Pelican Island was joined by filling in the sea between the two, adding just over 90 acres of land to Barbados. Until the 1940's, Pelican Island served as a quarantine station, processing Barbadian nation­als as well as crew and passengers of the many ships crossing the Atlantic and within the Caribbean. The Pelican Island historic site is marked by a lone carved pelican perched atop a one-ton boulder just inside the main entrance of the Port.

This landmark in the infrastructural development of Barbados signalled a realization of an effort that had started in 1694 when work began to "form a harbour at the town of St Michael, capable of accom­modating and protecting ships of 200 tonnes". This project was in the final phase of completion when the entire structure was destroyed by a violent hurricane. The cost of reconstruction was prohibitive and the govern­ment was forced to abandon the scheme altogether.

As Carlisle Bay was better sheltered than Speightstown, and provided easier access to landing, Bridgetown soon became the centre of shipping, commerce, and government. Carlisle Bay was thus established as a principal anchorage port from about 1641 until the official opening of the Deep Water Harbour in 1961. Between 1641 and 1891, as steamboat operated vessels began to displace sailboats, Bridgetown was the first port of call in the New World for vessels arriving from Europe. Thus Barbados became a centre of commerce, and the trans-shipment centre of the Lesser Antilles.

Not until 1815 was there any revival of official interest in the creation of proper port facilities for Barbados, and in 1867, serious consideration was once again given to the construction of a deep water harbour to handle the increase in shipping traffic. Several proposals were put forward for the improvement of the port of Bridgetown.

Discussion continued until 1915, when Mr. Brady submitted his Harbour Improvement Plans to the House of Assembly, supporting the designs and report by Mr John Coode, a specialist in harbour construction, which advocated a deep water harbour to be located in Carlisle Bay.

More reports and surveys followed during the next forty years, and by 1955, contro­versy raged as to whether or not the island should have a deep water harbour.

Impressed with the economic prospects of Barbados and the ability of the country to manage the project which was highlighted in the Incisive Report by Sir Archibald Cuke, the British government gave the green light to proceed, and the funds were realized partly from a grant by the British government and partly from public borrowing in London. Coode and Partners prepared the design drawings and contract documents, and the building contract was awarded to Richard Costain (West Indies) Limited in 1957. Construction commenced in June 1957 and the works were overseen by the new Premier Dr. Gordon Cummins and Minister of Communications and Works Ronald Mapp, since Sir Grantley had moved to Federal Headquarters in Trinidad in 1958 to take up the post of Prime Minister of the West Indies Federation.

In his address at the opening ceremony of the Deep Water Harbour on May 6, 1961, Sir Grantley observed that "we are living in a world that is shrinking, and while others are playing about in searching out new planets, we are ensuring that export to and from this island is made far easier for all." This was the era of the USA — Russia 'race-to-space rivalry', and just one month before in April 1961, Russian astronaut Yuri Gugarin became the first man in space. The completion of the Deep Water Harbour had incurred a cost of $30 million, and signalled an end to the lightering system of transporting cargo from the larger ships in Carlisle Bay to the Wharf, and the accompanying displacement of hundreds of work­ers. Some 600 workers were re-employed when the new port opened, and the govern­ment set aside $1,750,000 to relieve the plight of those workers displaced. In its first year of operation, the port handled approximately 175,000 tonnes of cargo.

New frontiers have been created with the construction of the Deep Water Harbour which has since expanded into the bustling Bridgetown Port of today.

In the 1970s the container revolution was gaining momentum, thus propelling the Port to expand to meet the new box transportation era in shipping. Additional land reclamation was made in 1978 when some 6.5 hectares of land was reclaimed, along with other infrastructural development to include the area that houses Shed 4 and the Shallow Draught facilities.

The Port has seen several admin­istrative changes subsequent to its establishment. Originally administered as Port Contractors Limited, the Barbados Port Authority was formed in 1979 as a Statutory Board. At the end of 2003 the organization was converted into a corporatized company now known as Barbados Port Inc registered under the Companies Act of Barbados.

Following a study in the 1990s which indicated that Bridgetown was coming to a crossroads, the Port, in order to meet the needs of the twenty-first century, embarked a on Reform and Expansion project to upgrade its human resources pool, improve technology and security, renovate infrastructure, and expand on its core businesses of cargo handling and the cruise sector.

In 1998 the master plan 2000 was completed and called for the construction of a new cruise pier to separate cruise and cargo operations, expansion of the passenger terminal facilities, building of Berth 5, and the expansion of port storage capacity by land reclamation north of Shed 4.

The inner harbour was dredged in 2002 to accommodate the larger mega-cruise ships which were being built, and further land reclamation was possible using the dredged material to add nine more acres to the Port's land inventory.

Most visible has been the work completed along Trevor's Way where a new revet­ment has been constructed, and the access to the main entrance to the Port landscaped. The container yard has been repaved, existing water mains replaced, the cross berth repaired, and Berth 4 extended, with financing from local commercial banks.

The Bridgetown Port is now a modern facility, structured to ensure its competitiveness and maximum operational efficiency. Berth 5 has been added with an additional 150 m and on it a Panamax Gantry crane has been placed. The crane was part of a $100 million project for the reorganization of the Port facility, which included five Diesel-Electric straddle carriers and other container and cargo handling equipment. The Port now has deeper berthing areas and acres of reclaimed land, as we build capacity to accommodate larger Cruise and Cargo vessels.

The future of the Bridgetown Port looks bright as we now start Berth 6, which is located to the north of the Port and will provide over 300m of additional berth for vessels using the Port. Meanwhile we will continue our competency-based training for all our direct labour, ensure compliance with international standards in terms of security and quality, implement strategies for use of renewable energy and environmentally focused initiatives that will contribute to the Port being best in class in the Region, both from a cargo and cruise perspective.

The Bridgetown Port could not have achieved the success over the years without the commitment and dedication of a highly productive work force, and former port workers are saluted for their sterling contribution. With generally harmonious labour relations being the order of the day, the Barbados Workers' Union has also played a significant role in shaping the destiny of the Port. The contribution of past Chairmen and General Managers is recognized, and the close working relationship with key stake‑holders is acknowledged.

The efficiency gains and improved service to various stakeholders and Port users, to be secured by investments to upgrade the infrastructure and technology, along with changes in the organizational structure, should serve Barbados well into the future, and maintain the Port's enviable position as a premier port in the region, as it continually strives to be 'Best in Class'.